Media outlets this morning report that a new inquest into the death of Pte Cheryl James at Deepcut Barracks begins today. The papers report on Syrian peace talks and speculation around a British military deployment to Libya.

Both BBC and Sky look ahead to the start of the new inquest into the death of Pte Cheryl James at Deepcut Barracks and include comments from her father, Des James. In the coverage Mr James says it is time the new claims being made about her death are heard in a court and are properly addressed. There was extended interview with Mr James on BBC 5 Live Breakfast (0648). The reporting includes our statement which can be seen in full below.

A Ministry Of Defence spokesperson said:

Our thoughts remain with the family and friends of Private Cheryl James. The inquest will now be a matter for the Coroner, but we will of course continue to cooperate with and provide support to the Coroner where needed.

Newspapers also look ahead to the inquest, 20 years after she was found dead with a bullet wound to her face. Reporting in The Guardian and The Independent says the new inquest may shed light on the long running mystery surrounding unexplained fatal shootings of young army recruits at Deepcut. Elsewhere, the Daily Mail reports that the MOD has blocked the release of thousands of documents. Our statement is also carried in these print articles as above.

Articles in The Telegraph and the Daily Mail report that British troops face legal claims over the British military campaign in Afghanistan. The papers says troops face a criminal investigation over the killings of 52 Afghans during the campaign, as ministers fear lawyers are to bring a new wave of cases against the Armed Forces. Coverage reports that the MOD has set up a specialist investigation, called Operation Northmoor, to deal with the claims from Afghanistan, and that Defence sources say ministers and commanders fear the aftermath of the Afghan campaign will now become bogged down in similar legal challenges, but ministers say they have no choice. Our position can be seen below in full:

There is a legal requirement to investigate credible allegations of criminal offences by UK Forces, which are held to the highest standards wherever in the world they may be. By no means all allegations lead to police investigations and no-one is prosecuted on the basis of allegations alone.

But we are determined to reduce significantly the number of spurious claims brought against our troops.

Every false, distorted or exaggerated claim diverts defence spending from the front line and could serve to constrain the Armed Forces in their operational effectiveness.

The Times reports that 1,000 British troops are set to tackle Daesh in Libya, claiming No10 and the Pentagon are in talks to persuade Libya to take the British troops to bolster its forces in the battle with the extremist group. The paper follows up on reporting that American and British military, diplomatic and special forces teams are making frequent trips to Libya to identify influential allies among the mix of the country's rival militias. The paper goes on to say sources have warned that the return of RAF bombers to Libya could create a problem for the Prime Minister because of the need for parliamentary approval.

A Ministry Of Defence spokesperson said:

The UK, along with international partners, is supporting the process to form a recognised Libyan government and we are developing plans to support this. No decisions have been made about the future deployment of any British military forces to Libya as part of an international coalition force.

Elsewhere The Telegraph and the Daily Star report that Daesh has vowed to carry out a doomsday attack on Britain. The reports say a video released by Daesh earmarks Buckingham Palace, Covent Garden and the National Gallery as potential targets.

Newspapers, including The Telegraph and The Guardian also look at Syrian peace talks and that they come in the aftermath of bombing attacks near a Shia Muslim shrine in Damascus, which killed 50 and injured dozens more, which Daesh has claimed responsibility for. The Independent reports that Ukraine has drawn up plans for a potential military contribution to fight Daesh in Syria in a move that could also pit its troops against Russian forces in the Middle East.

The Daily Star follows up reporting from the weekend that Army top brass have criticised the Prime Minister’s plans to put women on the frontline. The report says that senior officers blast the move as a "fatal exercise in political correctness" that will cost lives of male troops. The article carries the our statement which can be seen in full below:

A final decision is expected to be made in mid-2016 which will be informed by the ongoing review into opening ground close combat roles to women. This review is focusing on physiology and the potential risks to women’s health.  It is also considering the potential effects of many other relevant factors such as the cultural, legal and financial effects. 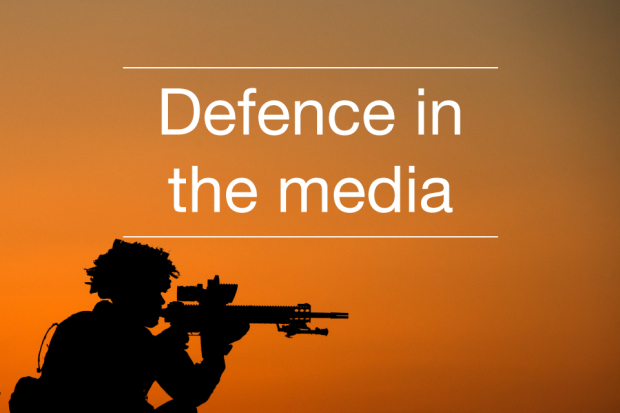