There is widespread online and broadcast coverage of the public sector pay increases which include a well above inflation increase of 2.9% for the Armed Forces.

The coverage followed speculative reporting about the pay increases in some of today’s papers including The Sun (p1 and p2), Daily Mail (p4) and The Times (p14 and p15).

Broadcast and online media including Sky News, the BBC News Channel and the World at One have reported that the Ministry of Defence has confirmed the closure of RAF Scampton, which is the home of the Red Arrows, and was also home to 617 Squadron as they prepared for the Dambusters mission.

It is also reported that RAF Linton-on-Ouse in North Yorkshire will also close.

The Times (p7) and The Sun (p28) this morning also speculate on the future of RAF Scampton and RAF Linton-on-Ouse.

Our military bases are where our service personnel live, train and work, so it’s important that we have sites which suit the needs of the armed forces. That’s why we’re making our defence estate more modern and efficient, by closing sites we don’t need an investing in more modern accommodation. As well as saving money, and allowing reinvestment back into a more modern and better defence estate, the changes will provide greater long-term stability and certainty for our Armed Forces and their families. 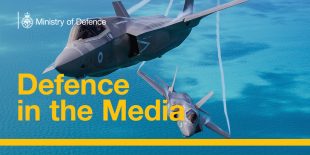