Several outlets, including The Daily Express and The Guardian, cover the photography competition, showcasing some of the best images submitted.

More than 1,000 photos and 25 videos were entered across the competition’s 13 categories, with the best nine images whittled down by three industry professional judges, before going head-to-head online to win the ‘Peoples’ Choice’ category.

To commemorate RAF100, competition entrants were asked to look to the following when considering their imagery for each category: Commemorate the essential contribution of our people to the success of the RAF, Celebrate the achievements and capabilities of the RAF, Inspire our next generation and leave a legacy to ensure our future success.

Image of the day: 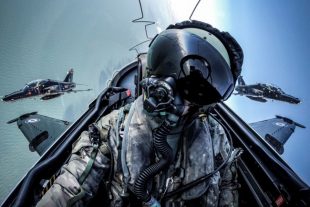 RAF photographer Cpl Tim Laurence captured a “Selfie” during a routine training sortie over the coast of Anglesey, Wales in an RAF Hawk T2, from IV Squadron based at RAF Valley.