Today’s defence-related news includes coverage of the final push against Daesh in Raqqa, and the F35 programme.

The Times,  The Independent, The Guardian, The Daily Telegraph, Daily Mail, Daily Star and The Scotsman, among other outlets, all report that Raqqa has fallen to the Syrian Democratic Forces (SDF). Coverage includes the role that the RAF has played in liberating Raqqa, striking 213 targets in and around the city since the start of the SDF offensive.

It is clear that the end is near for Daesh in Raqqa but there is no room for complacency. RAF strikes will continue to hit terrorist targets in order to ensure Daesh loses its capital in Syria as it did so in Iraq over the summer. We will stay the course as part of the Global Coalition battling the evil of our time ensuring the death cult is flushed entirely out of Syria and Iraq.

Read the latest in the fight against Daesh here

Successful ski-ramp trials mean the F-35 is cleared to fly from the carrier as the momentum continues for this game-changing jet. This milestone comes as our pilots and planes prepare to return from the States, ready for next year's unforgettable flight trials from the deck of the nation's new flagship.

She’s marvellous. She has an incredible amount of thrust but it’s more than just brawn that makes her so fantastic to fly - it’s the brains behind her as well.

She’s a masterful piece of engineering and it makes her so effortless to fly. It’s impossible not to be exhilarated every time. She’s a beast when you want her to be and tame when you need her to be. She’s beautiful.

The launch of the F35s from the HMS Queen Elizabeth is a once in a generation historical event. To be the first to fly off the carrier, to have a front row seat, would be an absolute privilege. It wouldn’t just be about the pilot - there are hundreds of people who have been working tirelessly behind the scenes to make this happen and the honour will be theirs too.

Read more about this story here. 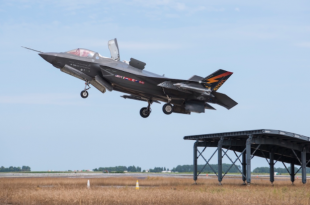 The UK's F-35s have been successfully tested on the ski ramp design at Pax Rivers, Maryland, in the US.